Today it’s all about baby steps that will bring you explosive growth! I am a believer that BIG things happen when you are on purpose everyday with your baby steps.

I’m so blessed and honored to work with some amazing women CEO’s worldwide, but every year I get a couple (smart men) clients, and Russ Perry had a brilliant idea for a business and 6 months later his new company produces over $20k a month. He is one of those trailblazing, entrepreneurs with a big vision and he is willing to do the work to get there. He is the CEO of www.designpickle.com which is brilliant for anyone who often needs graphics for their business. He offers unlimited amount of graphics for $195 a month! We created a great game for him called: “great dad, great husband and great CEO” and I can tell you that not many people on the planet are winning that game. He is. He inspires me on all levels and his creativity will do great things in this world for years to come! 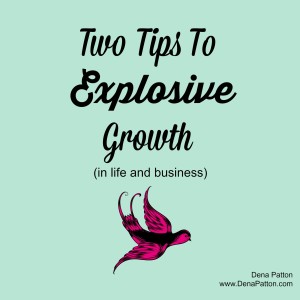 That leads me to 2 TIPS for explosive growth:

1. Be sure to have a specific game that you want to play and win.  I always say, “You are always winning the game you are playing”, which means if you aren’t playing a game (specific goal) then you are probably experiencing some level of frustration, Vaugeville, stuckness or complacency. When you get specific you’ll get results.

2. Be sure to have a big vision that PULLS you and inspires you toward it. Literally, when you think of your vision you should get chills, if you don’t get chills then you need to think bigger! When we create a vision you want to be sure not to create just “a better” version of today.  This is the future you are creating and living into so make it SO big! A vision gives you the information for you to work backwards so that you can create a monthly, weekly and daily task list to keep you on track to accomplish the big vision.

Summary:
Know your specific, big vision! And know the specific games you are playing in your life!

Need help staying in your greatness everyday?
Check out my new book The Greatness Game here.

Dena’s passion is to help women entrepreneurs structure, market and lead their business to the next level of greatness and revenue.  Let’s start today.